The Role of Agriculture in Earth Preservation

For this special Earth Day edition of Under the Microscope, we interviewed Lisa Ainsworth, molecular biologist at ARS's Global Change and Photosynthesis Research Unit in Urbana, Il. Dr. Ainsworth has received many accolades for her work, including the National Academy of Sciences Prize in Food and Agriculture Sciences in 2019.

Welcome back Dr. Ainsworth to Under the Microscope.

UM –  What do you think is important for the public to understand on Earth Day, about the role that agriculture plays broadly in climate change and environmental issues?

LA – There are opportunities for agriculture to contribute to solutions to climate change, and I think that's important. At the same time, agriculture has been a part of the problem, and has contributed a lot of greenhouse gas emissions, intensifying climate change. There are opportunities now, for agriculture to be part of the solution and I think that conveying that message, that there is hope, is what I would like to try to get across.

Agricultural practices can help sequester carbon in soils, decrease greenhouse gas emissions, and feed and fuel the planet.  There are opportunities to introduce new crops and varieties on the landscape and combine that with sustainable practices to create opportunities for farmers.

LA – Globally, agriculture is responsible for approximately a third of the greenhouse gas emissions, and because of this large footprint, there's a lot of room for improvement. ARS research is trying to address that: What can we do? Are there low-hanging fruit, things that farmers can do, that scientists can point to the benefits of doing? For example, there's evidence that conservation tillage can be used to maintain soil organic carbon and minimize the loss of CO2 from soils to the atmosphere, and that's a relatively simple change in practice. But we need to be able to quantify its benefit, both environmentally and then economically too, so that people adopt it.

UM – What can you tell us about tillage (plowing and turning the soil)? There's been increasing attention to that recently, in terms of environmental impact.

LA – Tillage has a big impact on CO2 emissions, because every time you plow up the soil, you're oxidizing carbon and releasing CO2 to the atmosphere. So as farmers adopt more either no-till – where they don't till at all – or at least at a minimum- or reduced-tillage practice, that can have an impact on greenhouse gas emissions through release of carbon dioxide to the atmosphere.

UM – What about what we plant, and where?

LA – There are areas within many fields that economically aren't paying out for farmers. Research shows that you can plant something else in that area that will both economically benefit farmers and benefit the environment. If we plant more perennials, say, on areas that are close to waterways or on farms that really are not economical, we can have a big environmental benefit in the landscape as well as a financial benefit to the farmer who may be losing money every year just by farming that ground with their current crops.

UM – What about which land we currently use to grow crops?

LA – If you look at a map of cropland expansion, and where croplands have expanded versus where they've been abandoned, corn and soybean production has moved into the Dakotas in a way that it just wasn't there 25 years ago, and that's in part because of climate change, because of more favorable growing conditions for those crops in that region.

There's been tremendous biodiversity loss in the context of moving those crops to those systems. As we think about increasing the sustainability of agriculture in the future, expanding the amount of land that's in agriculture would be counterproductive. In the United States, croplands already cover more than a fifth of the land area, so expanding that footprint would only amplify global change.

UM – Your research focuses on other ways we can change our agricultural practices in response to change to our weather and climate.

LA – My own personal research is on how crops respond to atmospheric changes, and so I see a real opportunity there: we know that the atmosphere is changing, and we know that different genotypes have different responses to those changes in the atmosphere. Currently industry isn't focusing on atmospheric composition and asking, can we breed for lines that are ozone-tolerant and responsive to CO2? I think there's a huge opportunity there.

UM – Are there ways we could make agriculture more compatible with biodiversity?

LA – I think that there are. If we look at regions that are intensively farmed, yet aren't economically sustainable, then changing the practices on that land is one strategy. Introducing native species back to that land or introducing perennial species that don't have the same inputs as annual species, and that perform other ecosystem services would be very compatible with bringing biodiversity back onto the landscape. And this could be done within conventional agriculture.— by Kathryn Markham, ARS Office of Communications. 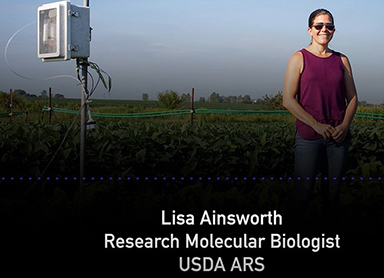 Thank you for your feedback
Top